Nature Scot are hoping to run tours this year but have yet to consider the Covid-19 restrictions that will likely be in place. Please check back for more information as guidance and restrictions change.

John Bullough purchased the Isle of Rum in 1888 as a sporting estate, adding to his portfolio of Meggernie Castle and estate in Glen Lyon. John was a wealthy industrialist from Lancashire, making his money through the family textile machinery business.He died in 1891, with his wealth and property divided between his two sons.
The island and John’s considerable wealth fell principally to son George (latterly Sir George) who commissioned the construction of Kinloch Castle in 1897 as a hunting lodge to replace a smaller one already in use. Despite only being a temporary residence, Kinloch Castle took three years to build, using Sandstone imported from the Isle of Arran and dozens of craftsmen. It was one of the first private residences in Scotland to have electricity supplied by a hydro-electric scheme that has been in use ever since.
George also owned a 221ft Clyde built yacht called the Rhouma, with whom he sailed around the world, in particular to Japan where he had struck a friendship with the Emperor. Gifts from him are still on display in the Castle today, as well as the Museum of Scotland in Edinburgh. The Rhouma was converted to a hospital ship during the second Boer War, for which George was knighted by King Edward VII in 1901. 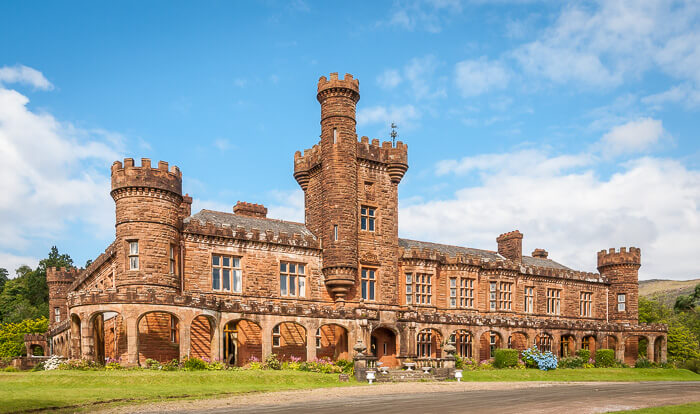 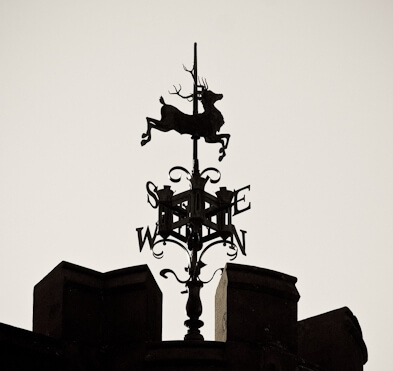 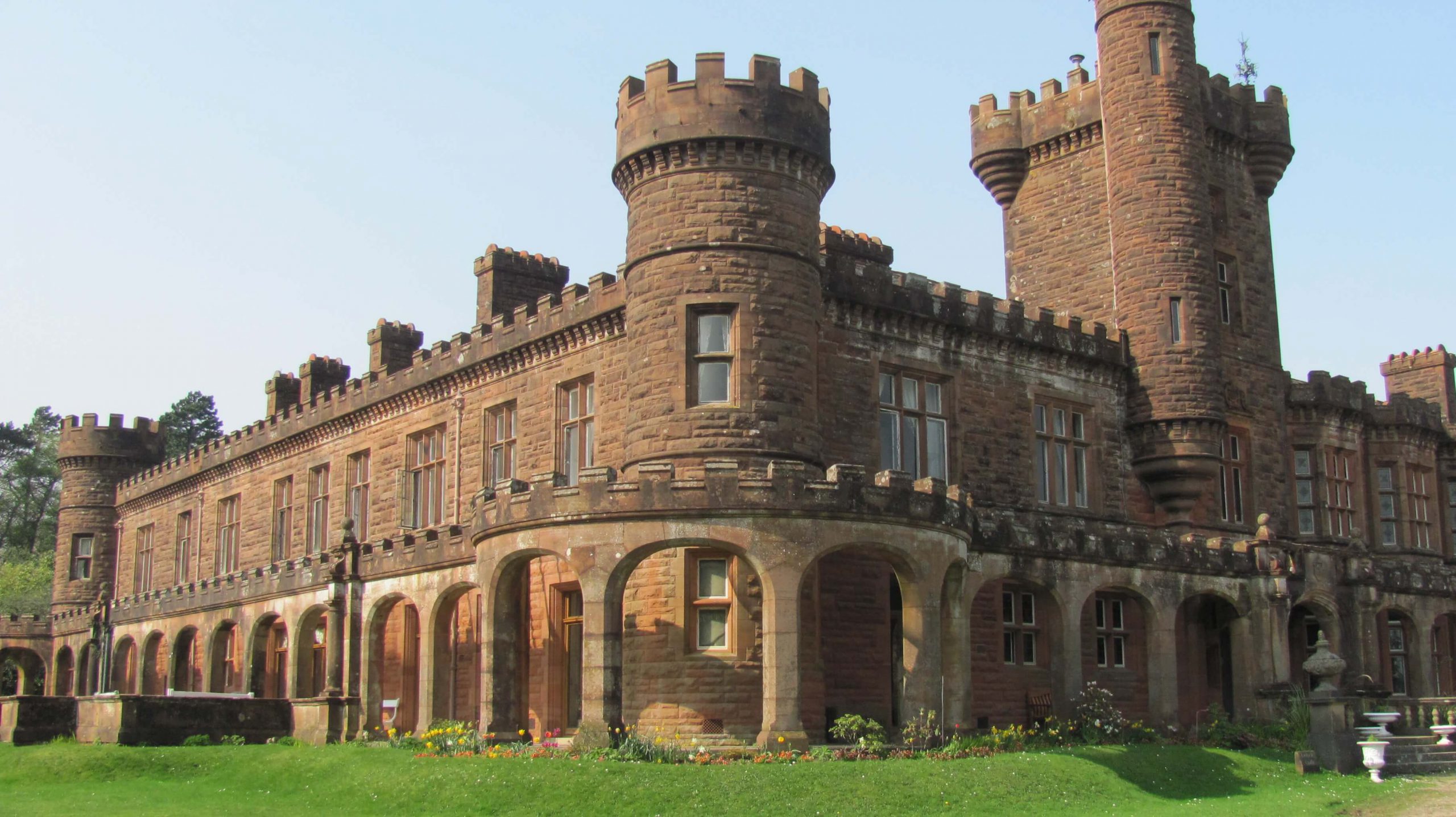 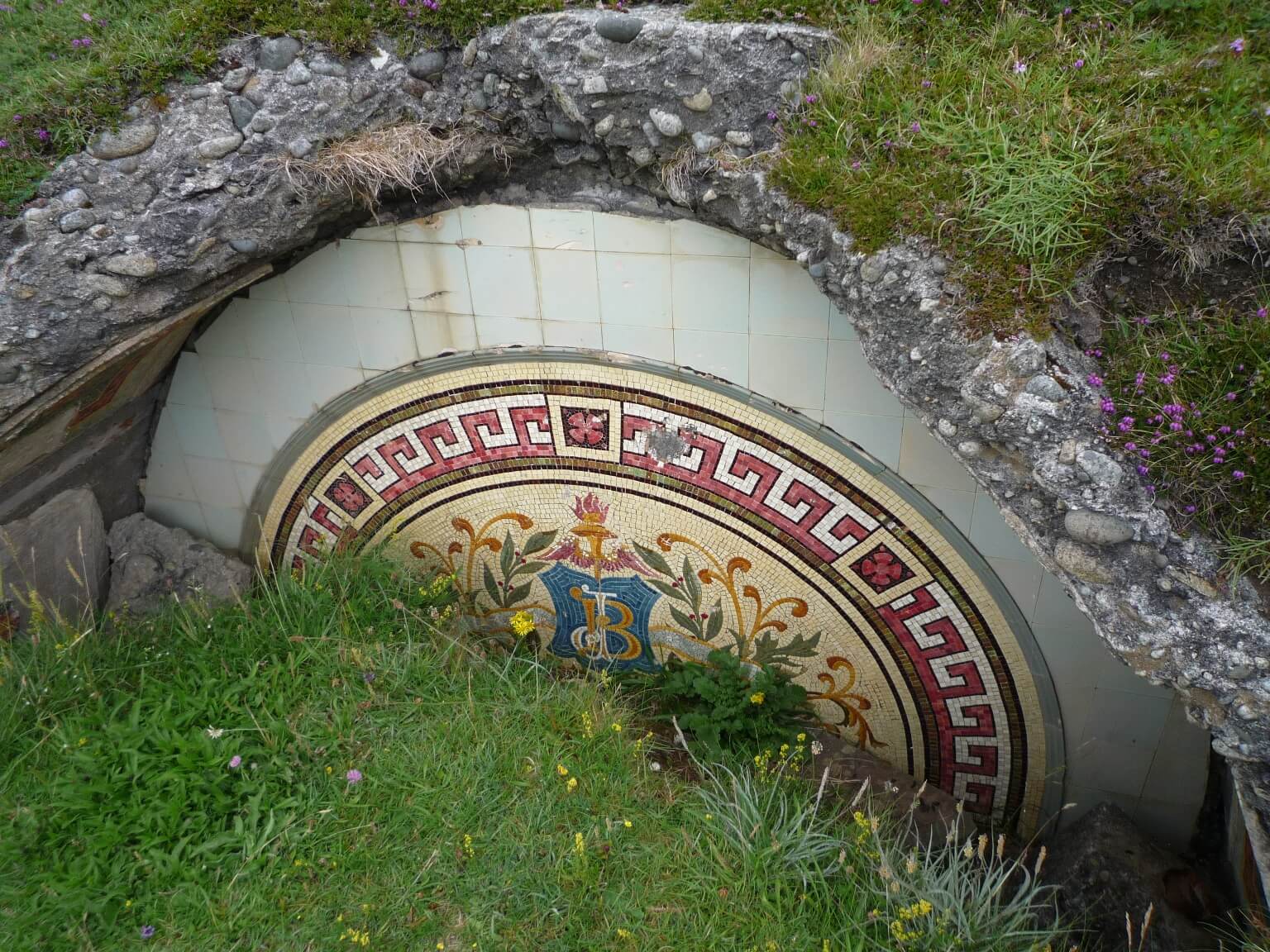 The Castle gardens were also important to George, who had 250,000 tons of soil imported; a walled garden and greenhouses were built and ornate gardens and ornaments installed. A palm house on the south side of the castle was (reportedly) full of hummingbirds, turtles and small alligators. Apparently this feature blew down in one of Rum’s infamous storms at a later date.
George married Monique Lily de la Pasture (latterly Lady Monica) shortly after the castle was built. She in turn made her mark on the castle, with major redecorating adding a more feminine touch to certain areas of the castle.
The various shooting parties that visited the island at George and Monica's invite were the 'nouveau riche' of the day, the aristocracy and for some 'entertaining' frivolity actors and actresses were also frequent guests. There is also a ballroom, complete with sprung floor and minstrel’s gallery. They enjoyed their privileged lives to the full.
Besides shooting deer there were various other activities on hand such as playing squash in the squash court, bowling on the bowling green or golf on the small golf course, and if the weather was particularly inclement a game of billiards would suffice.
Amongst the many unique features of the castle (inc. air conditioning in the billiard room) is a very special music player called the 'Orchestrion'. The Orchestrion is essentially an organ driven by an electric motor that plays perforated card rolls. Only three exist and the castle example is the only one that can be played. The instrument was constructed by Imhof & Muckle of Vohrenbach near Baden in the Black Forest in or around 1900. Apparently it was built for Queen Victoria who planned to install it in Balmoral Castle, but she died before it was completed.
The heyday of Kinloch Castle was relatively short lived as the Great War devastated those who would have visited the castle, as well as the Bulloughs on island staff. It is perhaps in part because of this that the castle and its contents became frozen in time. Sir George Bullough died in France in 1939, leaving the castle and island in trust to his wife Lady Monica. She spent a little time in the castle over the years, but sold the island and the castle, contents and all to the Nature Conservancy Council (NCC) in 1957 for £26,000. Lady Monica died in her Newmarket home in 1967. She is buried alongside her husband and father-in-law at the Mausoleum at Harris.
Further information on the castle can be found at Kinloch Castle Friends/ The Bullough Mausoleum at Harris, in the west of Rum is a dramatic Greek, Doric style temple structure that faces the Atlantic Ocean and has a backdrop of the Rum Cullin.
Originally Sir George Bullough had a mausoleum built in the nearby hillside with an interior of colorful Italian mosaic. A portion of the back wall with the Bullough coat of arms can still be seen above the current mausoleum to the north-west. It is said that one of his guests made less than complimentary remarks about the structure, along the lines of 'looking like a gents lavatory', so Sir George had it blown up and the current more conservative structure built.
Having stood for just over one hundred years and endured the worst Atlantic weather, the Bullough Mausoleum is solely under the guardianship of the Bullough Trust.
The Royal Commission on the Ancient and Historical Monuments of Scotland (RCAHMS) has an extensive database of information called Canmore including lots of information and many images relating to the island and castle for those looking for more. 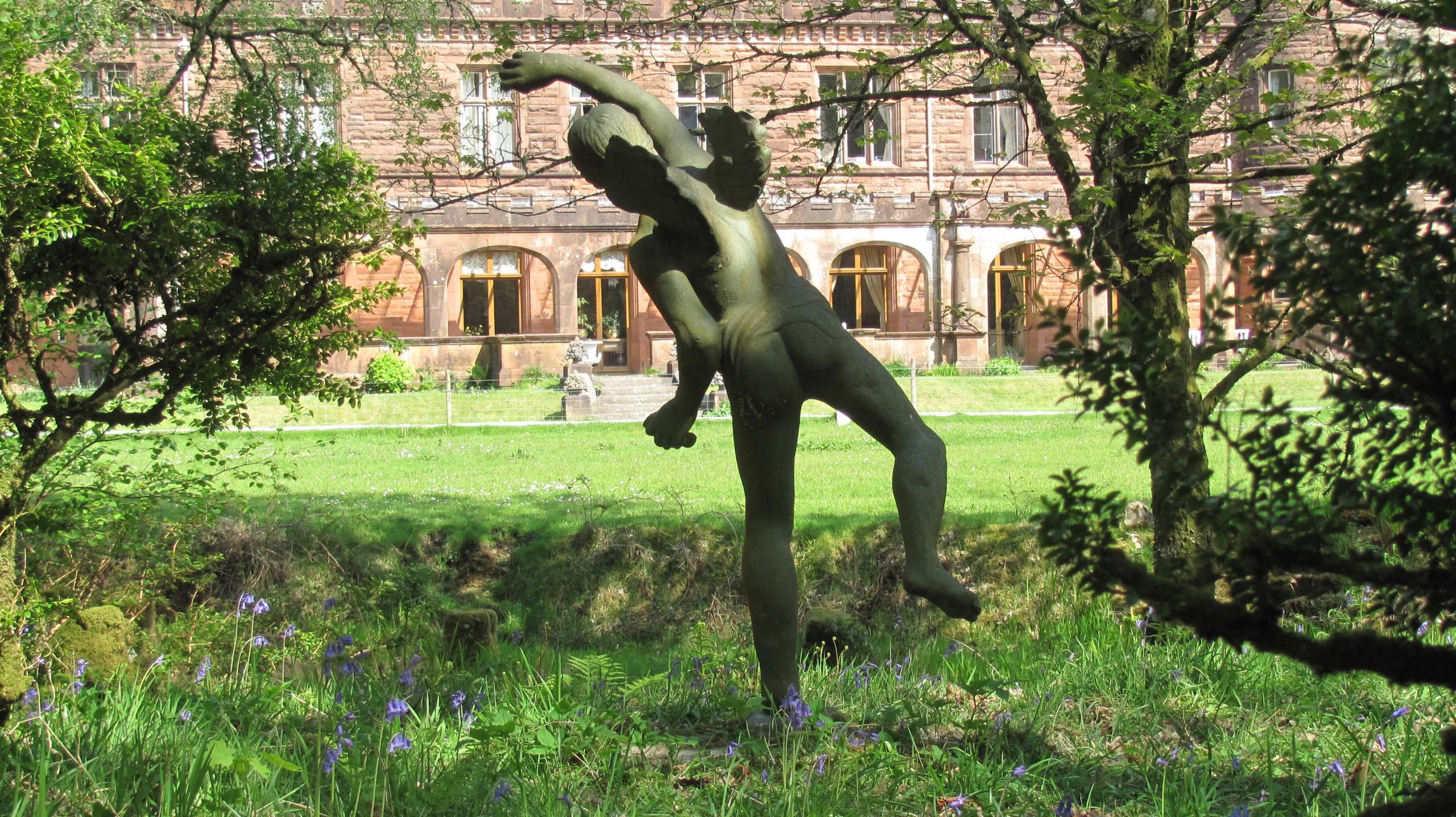 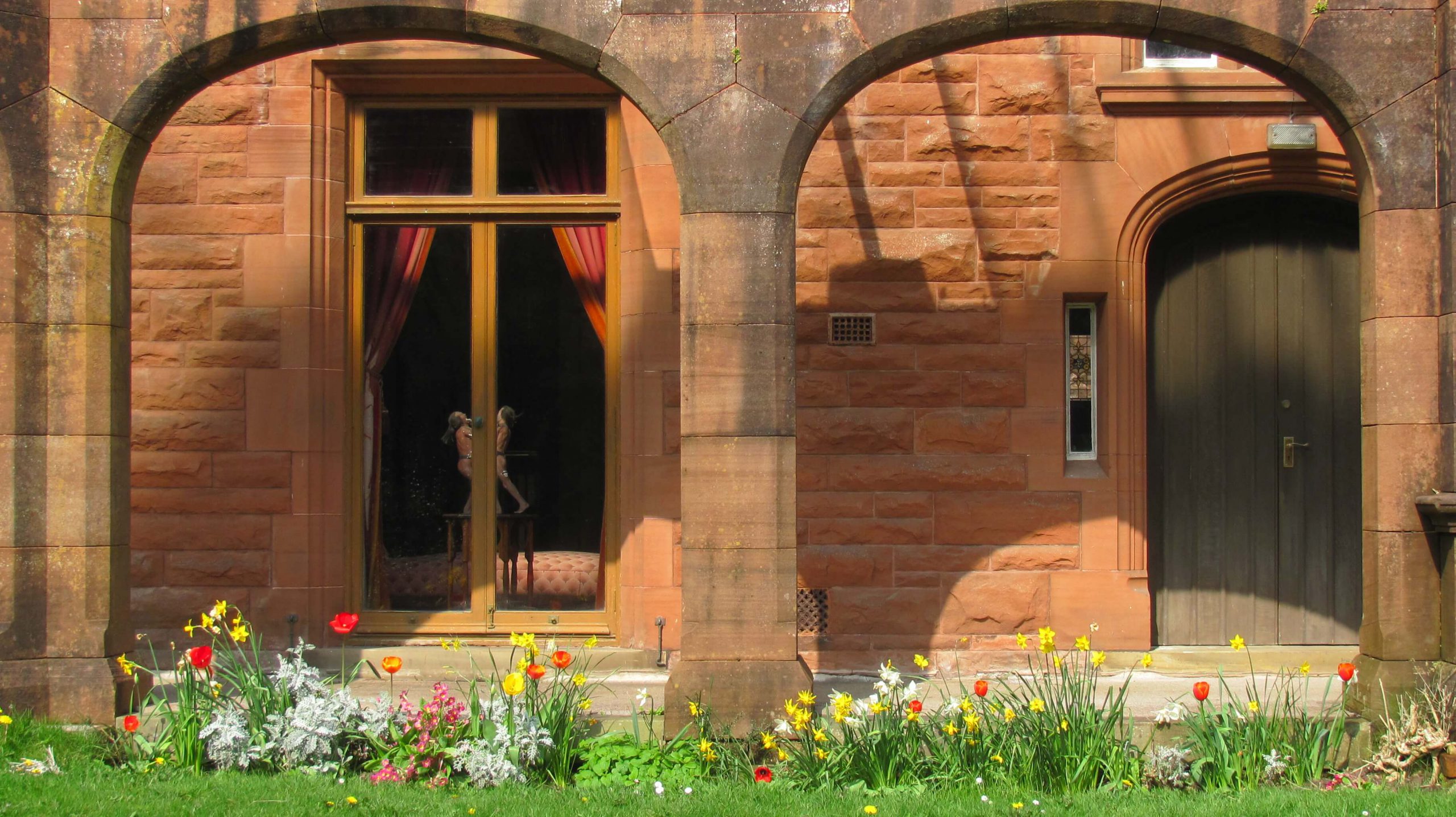 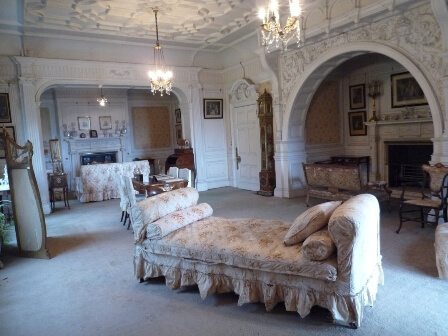 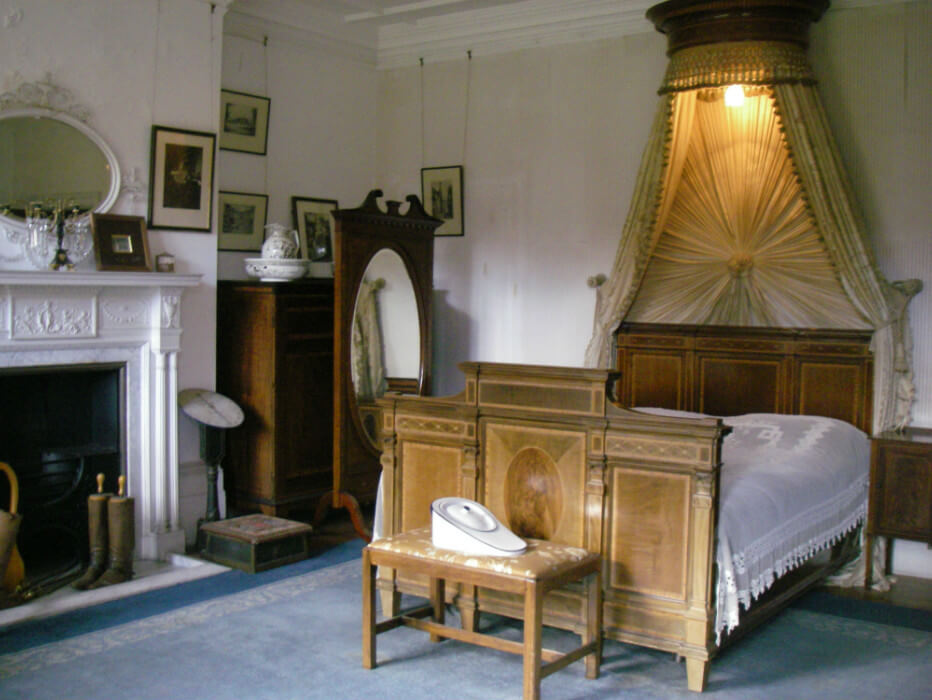 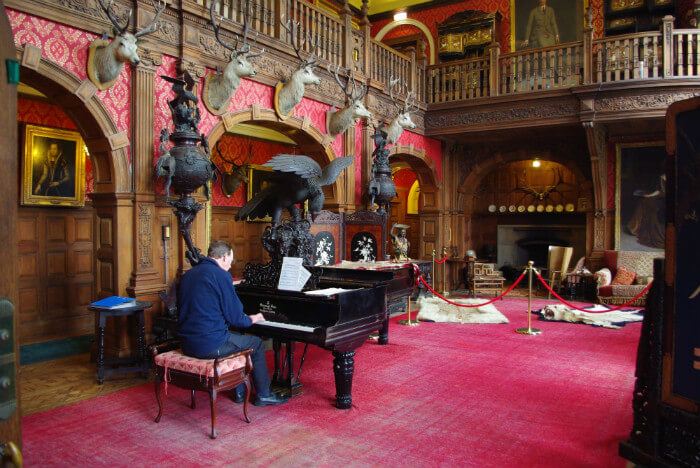 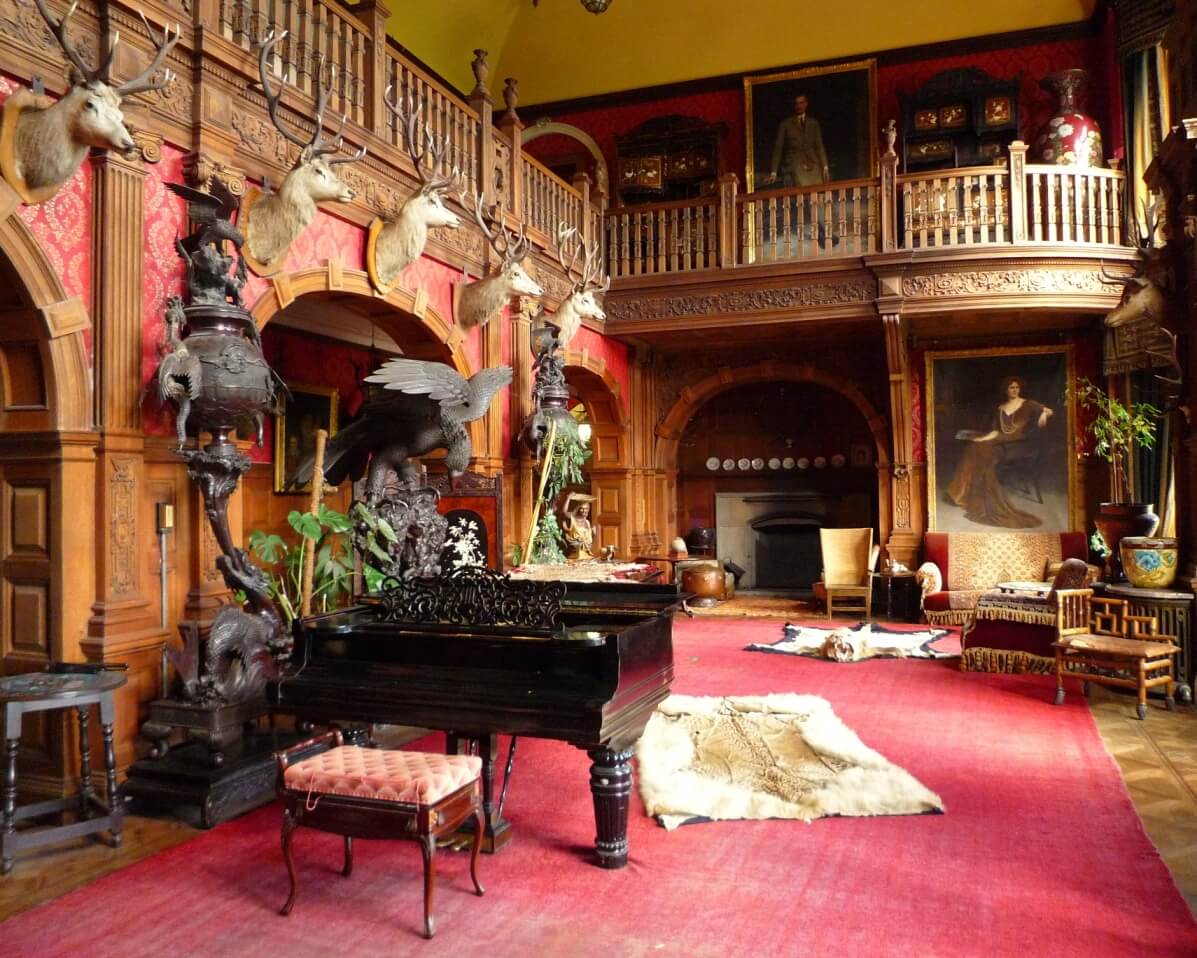 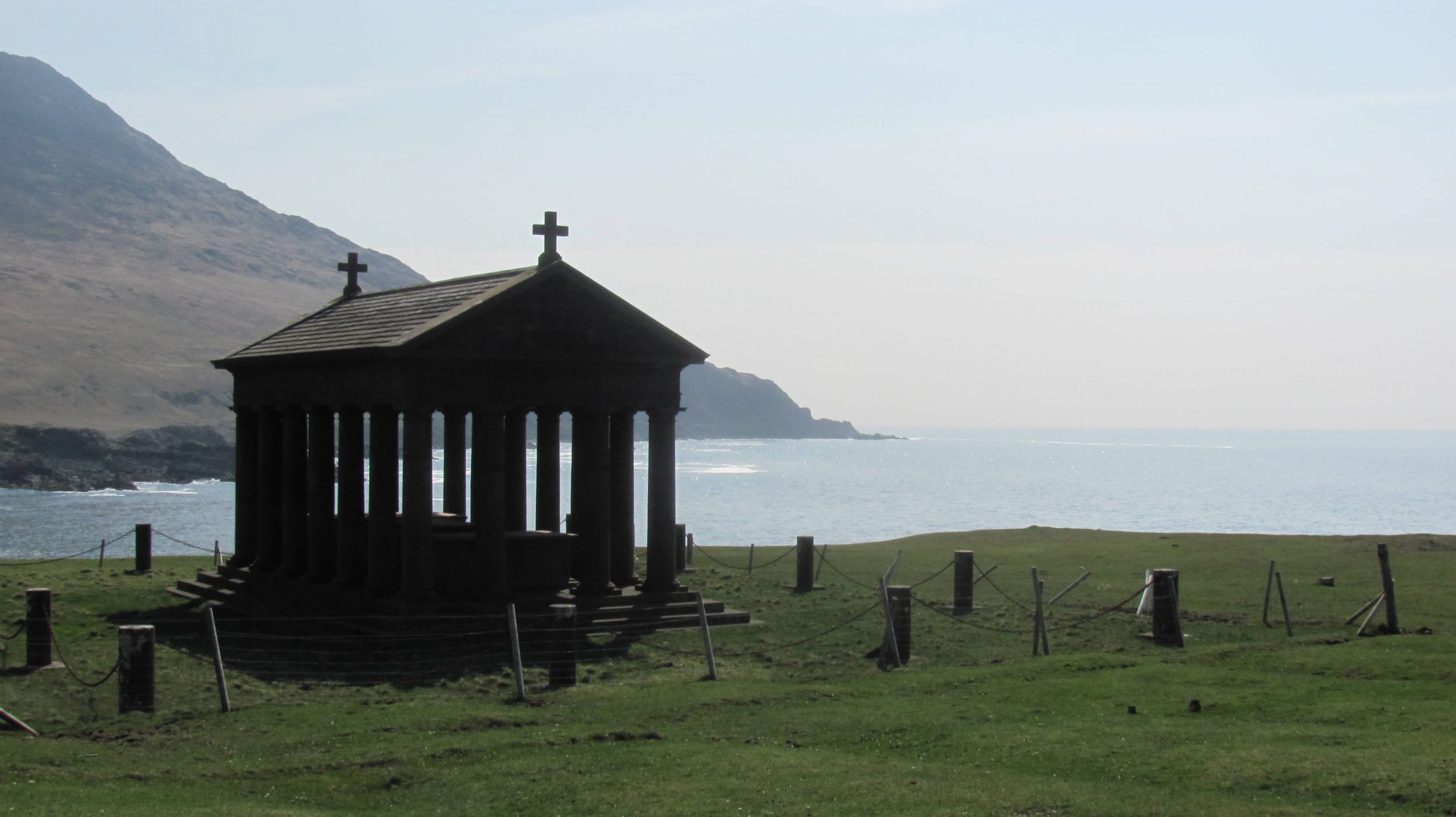 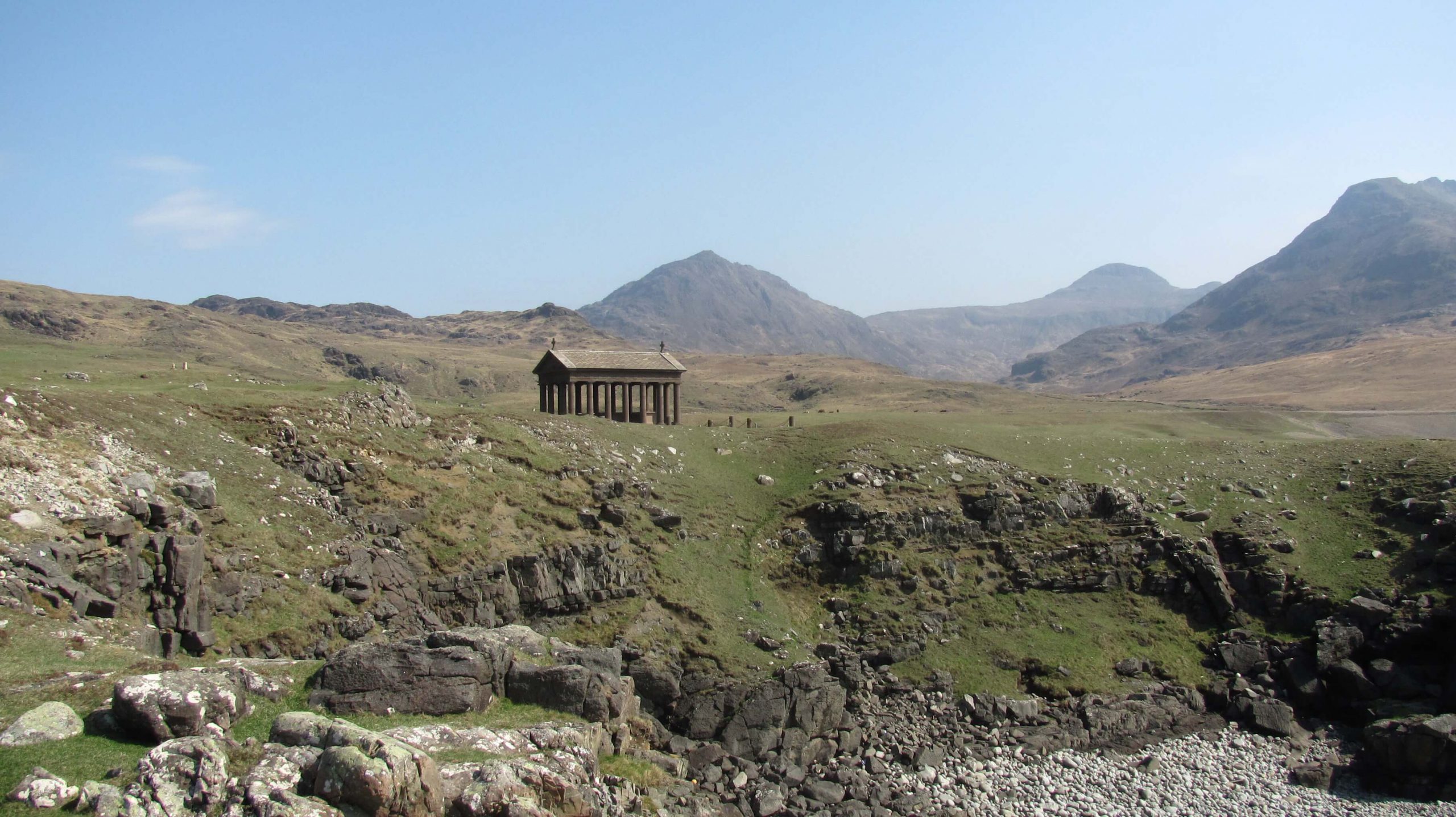 The Future
Scottish Natural Heritage will continue to invest in Kinloch Castle. It is a unique building and one that despite the expense and challenges of restoration, should be treated with great sympathy, not subject to short term fixes that erode its features and character.
Recent restoration has seen the oriel window part of the reading room and an upper floor bedroom to the rear of the castle saved from collapse; the main tower and water tank have been repaired; the turrets have been repointed and lead work replaced. Extensive roof work has also been undertaken and this will continue as resources allow.
Since interest in the castle was bought to public attention during BBC’s Restoration project in 2003 followed by a Prince’s Trust regeneration proposal, various and varied uses for the castle have been suggested.
In 2013 an outline options appraisal was submitted to Paul Wheelhouse, Minister for Environment and Climate Change. This report marks the first stage in an SNH led project which aims to determine a sustainable future for Kinloch Castle. The report reopened discussions and brought together key stakeholders to review the potential uses for the castle, building on the previous schemes but taking into account the significant changes which have taken place on Rum in recent years, and focusing on key objectives and options.
This working group looked at how the castle and its historic contents should be managed and ways of achieving this. The preferred option within the options appraisal submitted to the Environment Minister was to retain the museum aspect of the castle, while also allowing a mixture of residential and holiday accommodation in other parts of the building. Stakeholder engagement will remain an integral part of the ongoing process for the remainder of the project and the Rum community have a key role to play.
In the meantime, SNH will continue to invest available resources into repairing the fabric of the building and conserving the collection. For those interested in the castle, the Kinloch Castle Friends Association has grown from a casual interest group to an authoritative body looking to steer the future of the castle. The association welcomes new members. 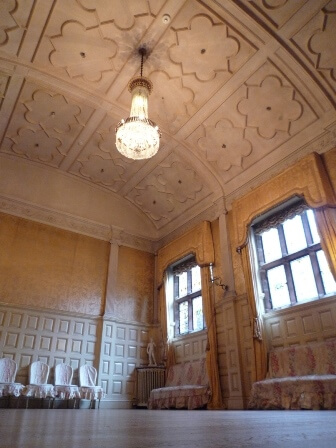 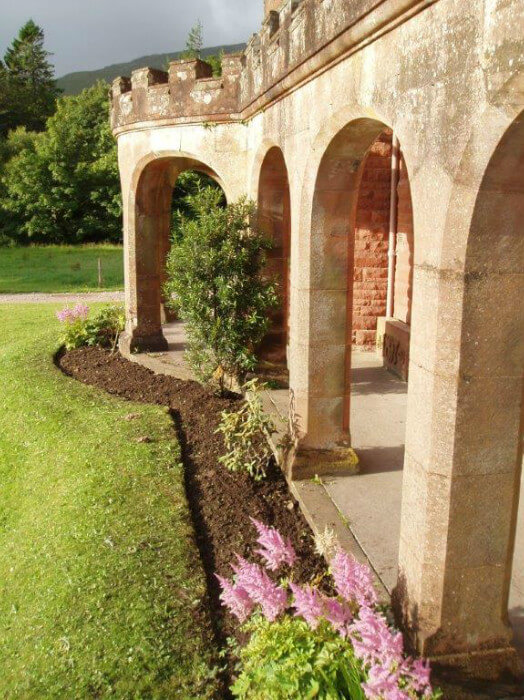 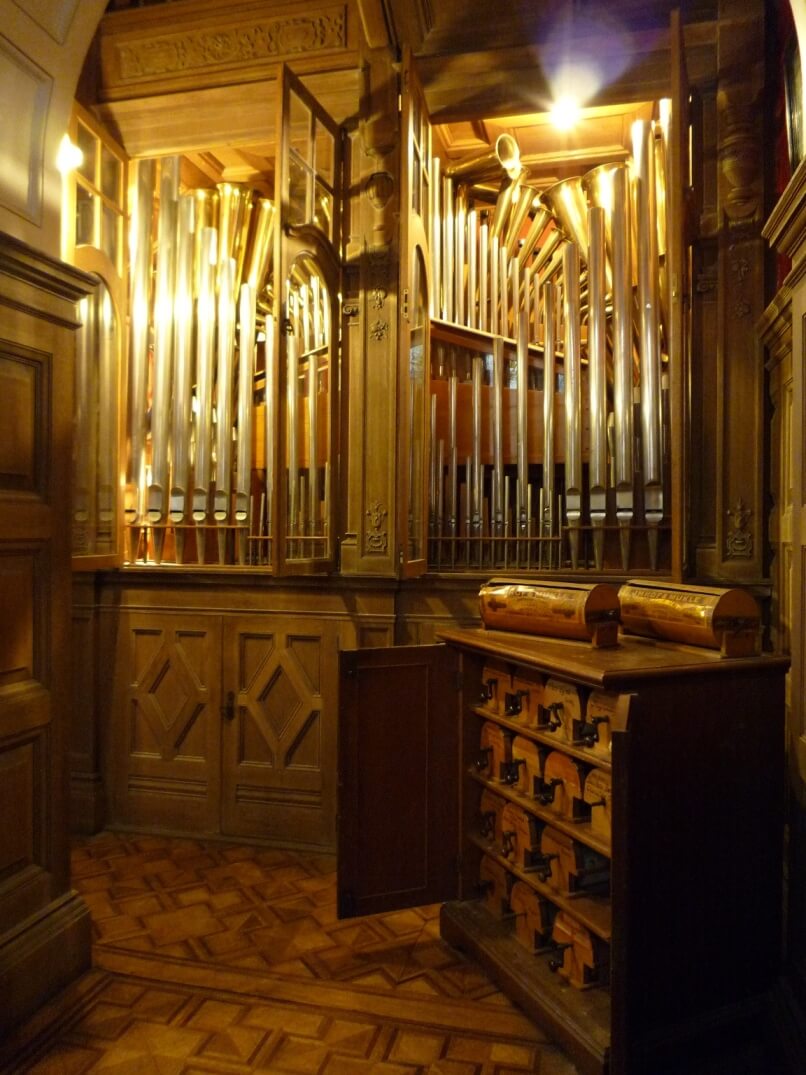 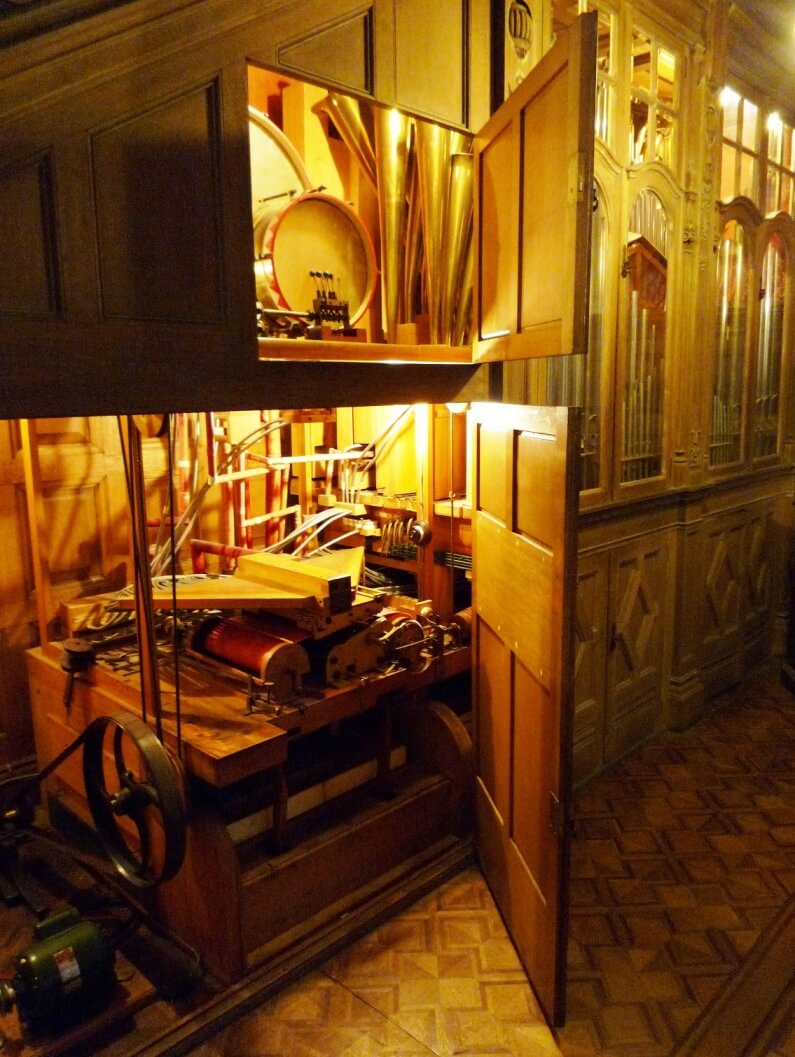